Hi, I’m Russ. I’m a full-time iOS indie developer working on Happy Scale. This app is my business, and it supports my family.

Life can change in an instant. I was pouring my son a bowl of cereal when I heard a buzz. It was an email on my phone from AppFigures (a service that tracks downloads and revenue for app developers).

The metrics are usually within a familiar, predictable range. Not today. Mysteriously, my daily download count was down 44%. 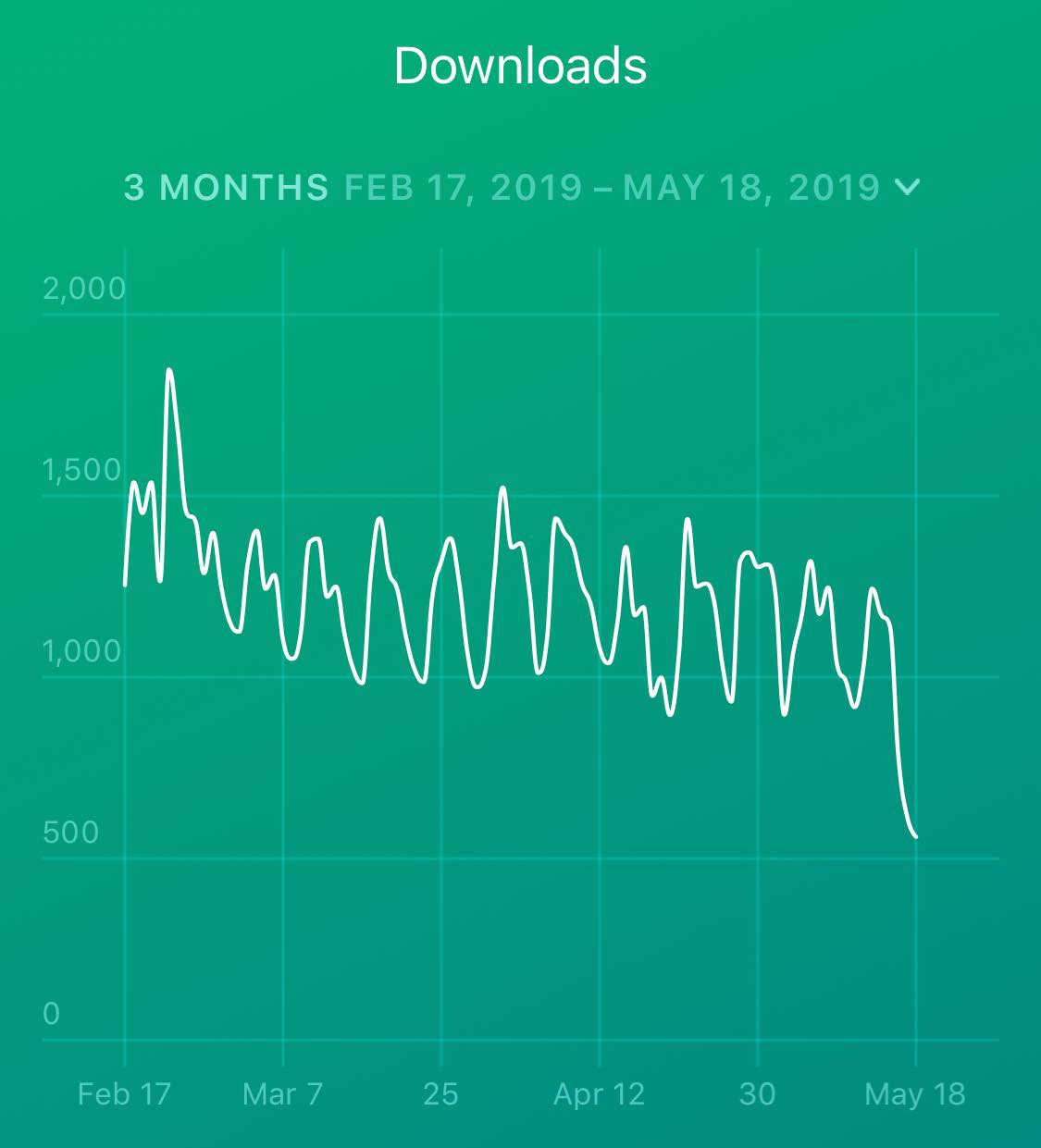 I panicked. Happy Scale is a product I’ve been working on for eight years. After investing countless nights and weekends into it, it grew to the point where it could provide for my family. I currently work on it full-time, and it is our sole source of income. Daily fluctuations are normal, but this was bizarre.

I put my phone on the counter. There wasn’t time to figure this out right now. I did my best to put my concern aside, and I drove my family to New Jersey for my niece’s birthday party.

Once the kids were asleep, I began sleuthing. 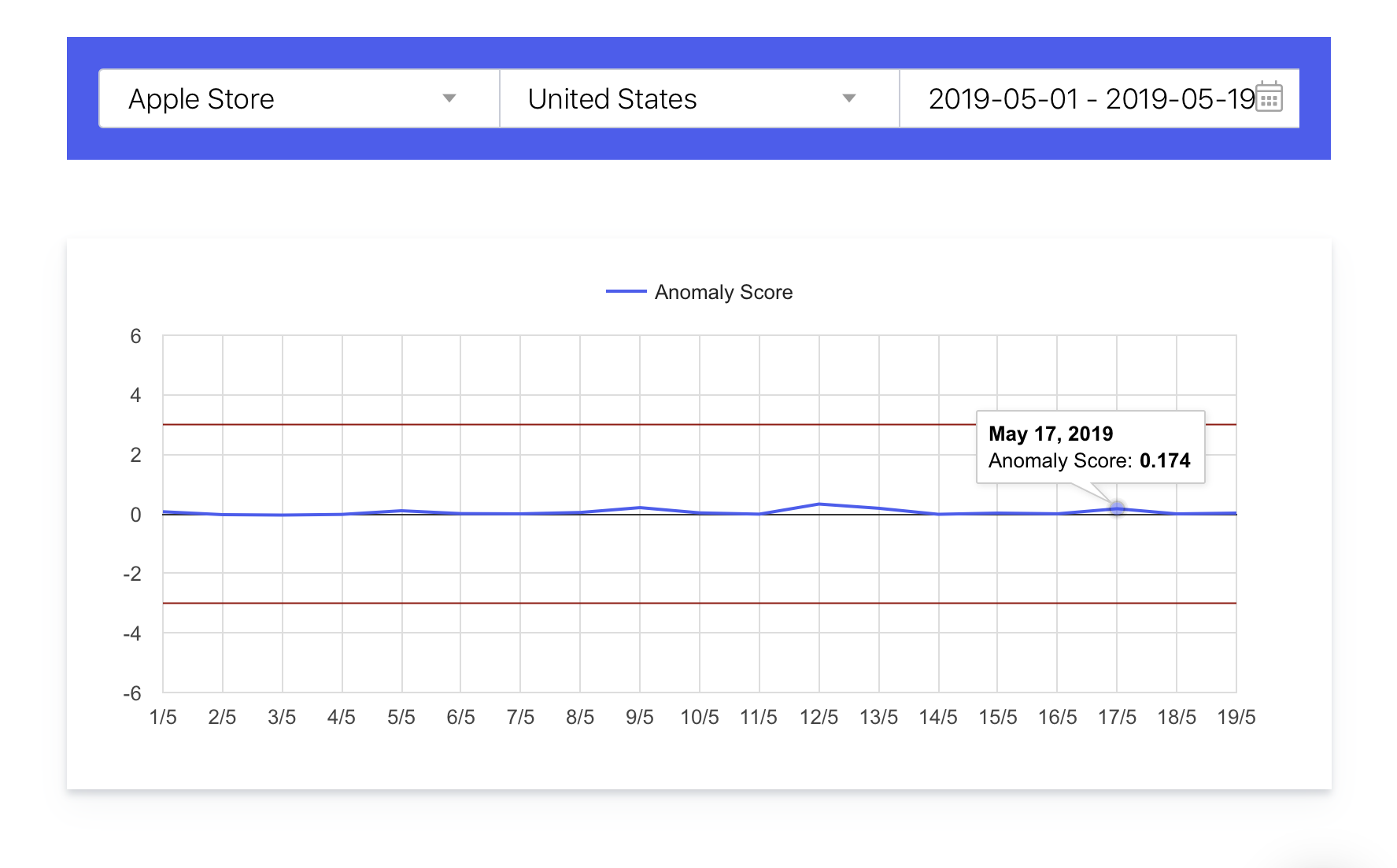 Then, I found something interesting. Sensor Tower revealed that my search result rank for “weight tracker” and “weight loss tracker” had fallen from the #1 organic search result to completely delisted.

Happy Scale vanishes from one of its most important search results.

This is baffling. I’ve been #1 for those keywords for several years. Going from #1 to out of the top 400? It doesn’t make sense.

It was particularly strange because the phrase “weight loss tracker” is part of my app’s subtitle. Research shows that the subtitle field is one of the most important elements of App Store search ranking.

“Predictive Weight Loss Tracker” has been the subtitle since October 2017.

I’ve heard of transient algorithm hiccups from other developers, and there wasn’t much I could do about it, so my first instinct was to hold tight. I hoped this was just a glitch, and it would sort itself out in the next search result calculation.

Happy Scale was still delisted in some of its most important search results. This was not sorting itself out. I had to act.

It’s surprisingly easy to get Apple on the phone. You just go to their developer site, find the “contact us” link, and within 15 seconds of tapping links, a real-life human calls you.

I spoke to a representative, and I explained the issue. I asked:

“Could you please look into why I have fallen from #1 to completely delisted for search terms that are in my subtitle, and see if there might have been a mistake?”

The representative told me he’d look into it and email me. We ended the call.

A few minutes later, I got an email:

Hmm... this looks like a pre-written answer to me. So I called back.

The new representative gave me the same response:

“Search rankings are not guaranteed.”

At this point, it occurs to me that Apple probably receives a ton of complaints about search rankings. I need to express that this is different. I persisted, and the representative put her supervisor on the line.

The supervisor said she could search for “Happy Scale” and it would come up in the search results, and therefore, there was no issue. I told her that this app is the means by which I provide for myself, my wife, and our three children. And that I have always been a good App Store ‘citizen.’

The supervisor heard me out, and then paused. She decided to open a ticket with the engineering team, and said that once they looked into it, they would email me.

I thanked her, and we ended the call.

Help was on the way.

On Tuesday, I heard nothing from Apple.

Incidentally, I took my iPhone X to the Apple Store for a screen repair. They fixed it for free, even though it was out of warranty. As I drove home, I pondered whether this free screen repair would be a prelude to more good things, or if I had just squandered all my good luck.

Here’s the thing: We’re less than two weeks away from Apple’s Worldwide Developers Conference, their biggest event of the year. Leading up to it, Apple’s engineers are all-hands-on-deck, scrambling to prepare.

This is bad news for me, because it means the chances of my case falling through the cracks are at an all-time high.

I call Apple again. The representative is courteous and compassionate. He puts me on hold for a few minutes. When he returns, he tells me that he found the existing engineering support ticket. He says that since there’s already a ticket, there’s nothing else he can do.

I tell the representative:

“Listen, I know I’m not Epic Games, but this app is my livelihood. I would greatly appreciate it if you could bump the priority of this.”

He chuckles at the Epic Games comment. Perhaps I’m getting better at these calls?

He says he can’t assign a priority, but he will attach a note to the ticket that states that this issue is a matter of a developer’s livelihood.

No progress. I call again. I’m told to wait for a response on the existing engineering ticket.

No progress. Daily download numbers are still way down. On average, downloads are down 44% of where they were in recent weeks. 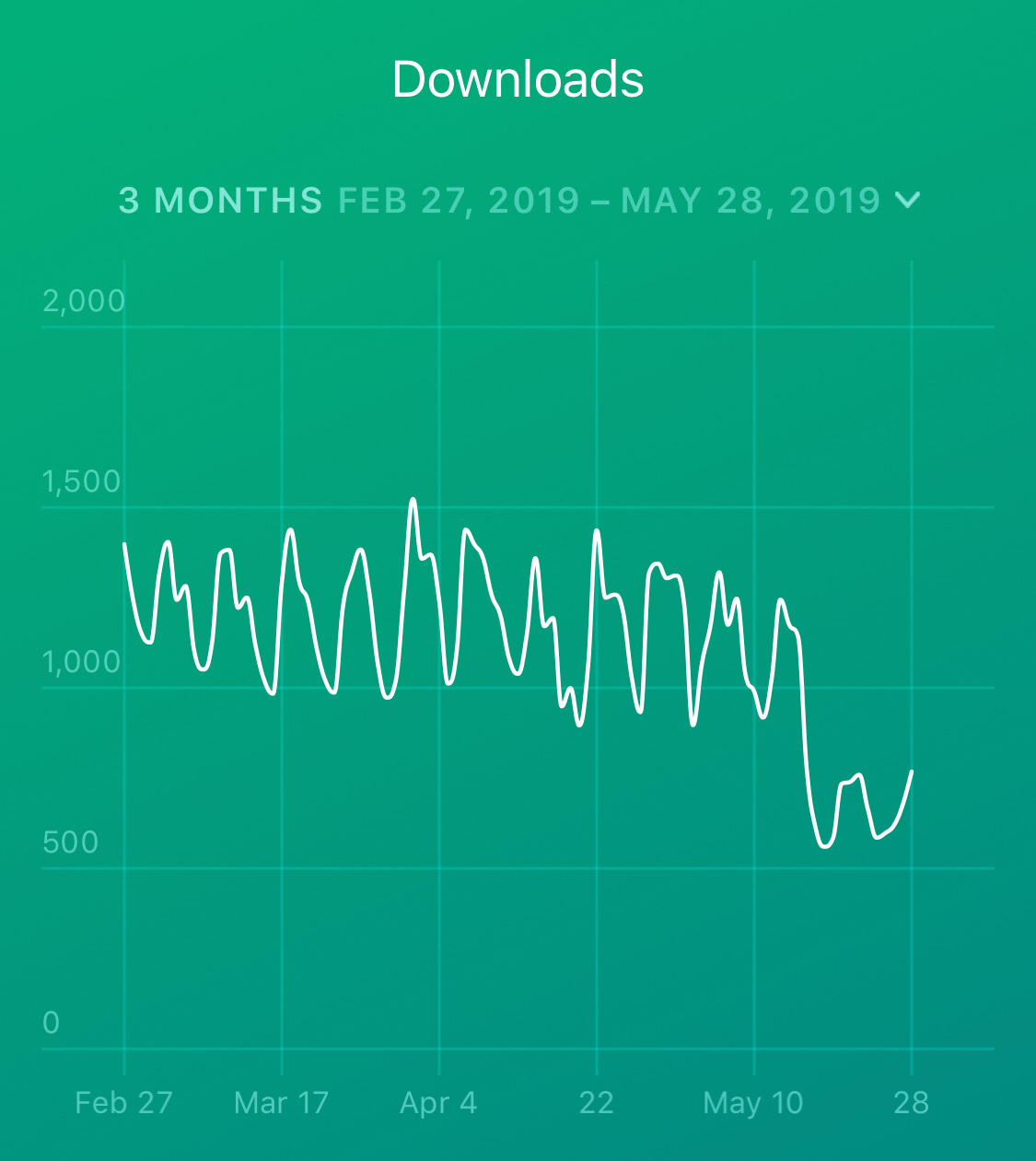 App downloads are still down, a week and a half later.

If this continues, I will have to stop working on Happy Scale pretty soon. I have a family to provide for, and if this propagates into a 44% reduction in revenue, this business will not be sustainable.

This would be detrimental to the thousands of Happy Scale users, as I had several great updates planned for the app.

I hope this isn’t the end of the story.

I plan to keep checking in with Apple on this issue until it’s resolved. After all, perhaps this is some subtle issue within their system, and my inquiries will lead to a fix that will prevent it from happening to others in the future?

Have you ever experienced an issue like this? I would love to hear about your experience by email or Twitter.

Update: I Have a Workaround!

I received so much great feedback on Twitter from folks who have experienced issues like this, and many proposed workarounds I could try. But one bit of feedback in particular seemed to describe this issue perfectly. Ilia Kukharev of APPFOLLOW said:

Another day — another bug in the #AppStore. Words at the end of Subtitle stopped indexing. If you have 30 symbols in your Subtitle — the last word won't index in the App Store and you lose all positions for the search terms with this word. pic.twitter.com/KT3mfQOJKw

This matched my cirumstances precisely:

As luck would have it, I had a build that was sitting in Pending Developer Release that shortened the subtitle to “Weight Loss Tracker.” I pushed that build to the App Store, and within a few hours I discovered that I was coming up in the search results again. (and at the original position!)

I have a case number (radar?) of 100815666347, and another user on Twitter mentioned they have a case number of 100823266114. If this bug is affecting you, too, you can reference those cases when calling. I will be calling Apple later today to fill them in on what the folks at APPFOLLOW have found.

Indie life can get scary when you’re facing a big issue with no path forward. I’m grateful for friends and family who helped me face this, brainstorm solutions, and edit this blog post. And I’m grateful to the community. The sharing, support, feedback and stories I received have shown me how much the iOS community can stand with you when you need them most.

The lesson I take from this experience is that it’s dangerous to rely too much on dependencies that are completely outside your control.

The App Store has been many great things to me over the years. It solved issues of distribution, connecting with customers, payment collection, privacy and security that would have prevented me from ever building anything if I had to do it all myself. It was a great way to get my business off the ground.

But the time has come for me to examine my dependence on getting a constant stream of new downloads from the App Store in order for my business to remain sustainable. I would love to be able to continue to build this product out for many years to come. I need to take steps to add resiliency and diversity to my business’s income stream.

Discussions of this story: